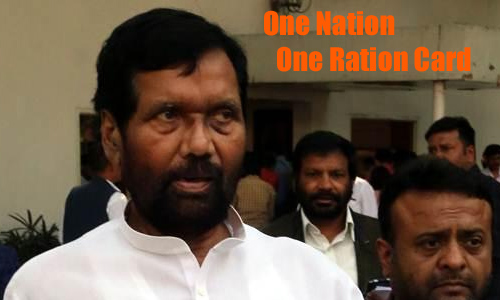 The govt. of India is moving towards the “One Nation One Ration Card” said by the Food Minister Mr. Ram Vilas Paswan, which will enable beneficiaries to get their quota of grains from any ration shop across the country.

In a meeting on Thursday as on 27th June 2019 Mr. Paswan Said the aim of this scheme is to providing freedom to beneficiaries, as they will not be tied to one PDS shop, reduce their dependence on shop owners and curtail corruption.

The Union Minister for Consumer Affairs, Food and Public Distribution Ram Vilas Paswan chaired a meeting on the scheme Thursday with food secretaries and other officials of state governments, Food Corporation of India (FCI), Central Warehousing Corporation (CWC) and State Warehousing Corporations (SWCs), he said this scheme will biggest beneficiaries will be migrant workers who move one place to other to seek better job opportunities.

He also added in his statement that the target of completing this scheme is one year and all the formalities is already started and soon it will be available for the consumers.

This is not the official website and we are not associated with any Ration Card Services or its websites. The content of the website is just for Information and guide. Please visit the official site of the state govt. of ration card and must read our Legal Disclaimer for more details.